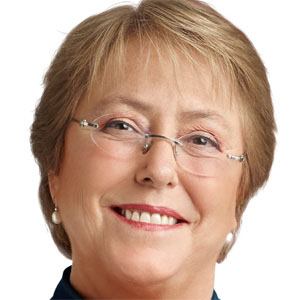 Socialist Party leader who served as President of Chile from 2006 to 2010 and began a second term in office in 2014. Previously, she had served as both Chilean Minister of Health and Minister of National Defense.

After attending medical school at the University of Chile, she worked at a community clinic in East Germany and continued her medical training at Berlin's Humboldt University.

From 2010 to 2013, she served as Executive Director of the United Nations Entity for Gender Equality and the Empowerment of Women, also known as UN Women.

She was born in a suburb of Santiago, Chile to military general Alberto Bachelet Martinez and archaeologist Angela Gomez. Her marriage to Jorge Leopoldo Davalos Cartes produced three children.

She and her contemporary, fellow female politician Soledad Alvear, both held high-ranking positions within the Chilean government. Alvear held office as Foreign Minister under the presidential administration of Ricardo Lagos.

Michelle Bachelet Is A Member Of