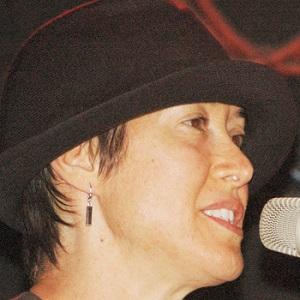 Alternative folk singer and songwriter who has infused politics into her work and released the single "Anchorage."

She was taped singing around a campfire at the Kerrville Folk Festival, which prompted England's Mercury Records to offer her a record deal.

Breaking into the U.S. with her 1988 album Short Sharp Shocked, she gained strong support and airplay on college radio.

She was born Michelle Karen Johnston in Dallas, Texas.

She made an anti-same-sex marriage speech in 2013 at a San Francisco club, prompting controversy; Shocked went on CNN's Piers Morgan Live to attempt to explain herself.

Michelle Shocked Is A Member Of