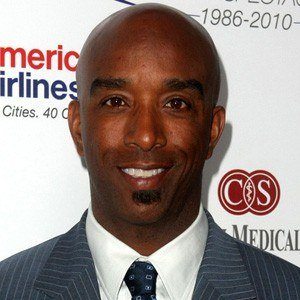 Former NFL receiver who was a member of three Rose Bowl-winning UCLA teams and became one of UCLA's all-time leaders in receptions and receiving yards.

He lettered in football, basketball, and track and field at Chico High School in California.

He was selected 18th overall by the Dallas Cowboys in the 1986 NFL Draft.

His father Robert played college basketball as well as semi-professional baseball while his mother Cherrie was a sprinter on the 1964 U.S. Olympic team.

He suffered a number of injuries during his 11-year NFL career and spent his last season catching passes from Hall of Fame quarterback John Elway on the Denver Broncos.

Mike Sherrard Is A Member Of