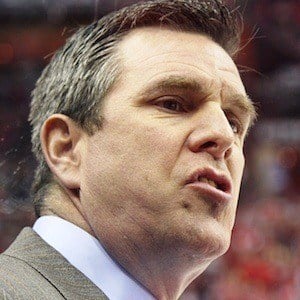 NHL coach and former player known for the leading the Pittsburgh Penguins to the 2015-2016 Stanley Cup title. He was hired after Mike Johnston was fired during the season, making him only the sixth mid-season hire to win the Cup.

He played college hockey at Boston University and was drafted 87th overall in 1987. He played for San Jose, Calgary, Boston, and Phoenix over his 11-year career.

He landed his first NHL head coaching job in 2003 at the helm of the Boston Bruins, but was fired after two seasons. He was coaching Pittsburgh's AHL affiliate when he was hired to coach the Penguins.

He has three children, two daughters and a son, with his wife Kate.

Darryl Sutter, in 2012, also won a Stanley Cup after being hired in the middle of the season.

Mike Sullivan Is A Member Of