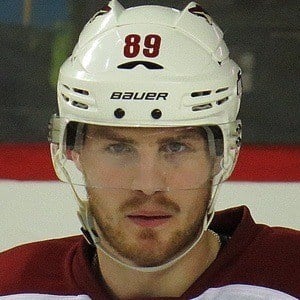 Right wingman who in 2008 was drafted at #8 overall in the NHL Draft, making him the then-highest ever drafted Danish player in NHL history. He was traded during the 2015-16 season to the Colorado Avalanche.

He played youth hockey for the world renowned Rødovre SIK youth Danish club. He then moved to Frölunda HC at age 15.

He was featured on the cover of the video game NHL 10 in Denmark and Norway. During the 2012 NHL Playoffs, he scored two consecutive game-winning, overtime goals in the first round for the Phoenix Coyotes against the defending champion Chicago Blackhawks.

He was born and raised in Broendby, Denmark.

He was traded to the Colorado Avalanche during the 2015-16 season for Alex Tanguay.

Mikkel Boedker Is A Member Of