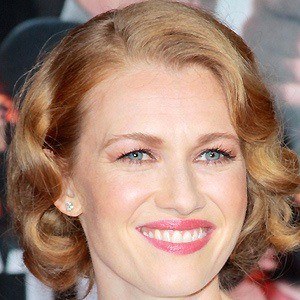 Actress who played Sarah Linden on AMC's The Killing and portrayed the Marquart twins on HBO's Big Love. In 2019, she began starring on Amazon's Hanna. She has also starred in the films World War Z and If I Stay.

She was born in Kansas City, Missouri to a French mother and a Texan father, and she was raised in the Mormon faith.

She earned a Tony Award nomination for her role in the 2005 Broadway revival of Who's Afraid of Virginia Woolf.

She married Ferris Bueller's Day Off actor Alan Ruck in 2008. The couple has a daughter, Vesper Vivienne Ruck, and a son named Larkin Zouey.

She played the wife of Brad Pitt's character in the 2013 zombie apocalypse film World War Z.

If I Stay
World War Z
The Lie
More