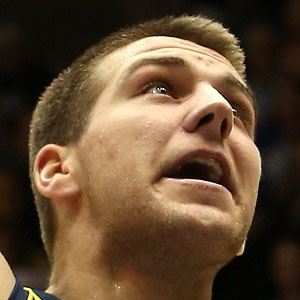 Power forward/center known for his tough rebounding and all out hustle. He spent two years in the NCAA with the Michigan Wolverines, helping lead the team to the NCAA Championship game in 2013. He was selected 21st overall in the 2014 NBA Draft by the Oklahoma City Thunder.

After playing sparingly during the 2012-13 NCAA season, he broke out during the 2013 NCAA Tournament, helping the Wolverines top the Kansas Jayhawks, Florida Gators and Syracuse Orange en route to the Championship game.

He was born to Tim and Valerie McGary.

In 2013, he became the second player after NBA All-Star Blake Griffin to score 21 or more points and grab 14 or more rebounds in back-to-back NCAA tournament games.

Mitch McGary Is A Member Of