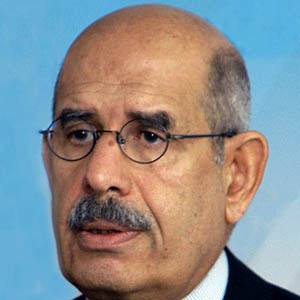 Politician who was sworn in as the interim Prime Minister of Egypt in July of 2013. He played an important role in the 2011 revolution which topple President Hosni Mubarak.

He earned a Master's degree in International Law from NYU in 1974.

In 2005, he was awarded with a Nobel Piece Prize as a result of his efforts to help ensure that Nuclear Energy was not used for Military reasons.

He had two children with wife Aida El-Kachef, a daughter named Laila and a son named Mostafa.

He has called for a criminal investigation into George W. Bush and his former administration for their role in the War in Iraq.

Mohamed ElBaradei Is A Member Of