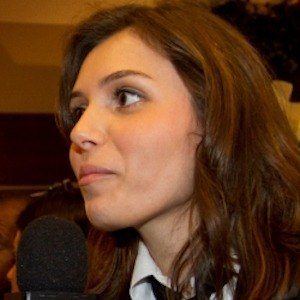 TV actress and reporter who has worked for the Brazilian Globo network. In 2014, she worked as a commentator for the 14th iteration of Big Brother Brasil.

She earned her degree in performing arts from the University of Campinas in 2005. She then began her career as an actress with the theater group Os Satyros.

Between 2009 and 2013, she worked on over 40 episodes of the Brazilian comedic variety show CQC - Custe o Que Custar as a reporter. In 2015, she appeared as a guest star on the TV series Tomara que Caia as Natasha.

She appeared alongside skateboarder Bob Burnquist at the 2012 Brazil MTV Video Music Awards as a presenter.

Monica Iozzi Is A Member Of