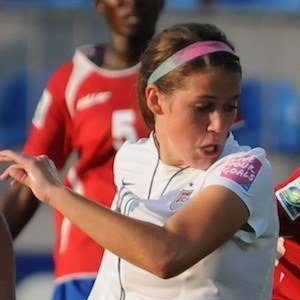 Soccer player who is known for playing on the Duke team as number 24. She is also known for posting modeling pictures and other athletic shots to her Instagram for her 240,000 followers.

She posted her first picture to her Instagram on April 9, 2012.

As a player for Duke, she is known for having 17 straight wins and winning the ACC Championship.

She was born and raised in Cleveland, Ohio. She can be seen photographed with her sister Madison on her Instagram.

Other notable alumni from Duke include Belle Knox, Rita Volk, and Dylan Lauren.

Morgan Reid Is A Member Of