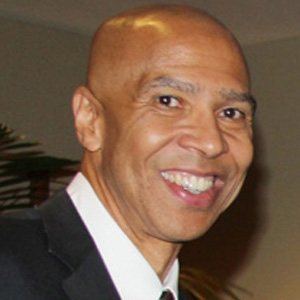 As the first non-American player drafted into the NBA, he won two championships with the Los Angeles Lakers in 1987 and 1988, then began broadcasting Laker games.

His family moved from the Bahamas to the United States when he was young, and he started playing high school basketball in Miami.

He was a bench player for the Lakers, but his defense was instrumental to the team's back-to-back championships in the late 1980s.

He married Julie Thompson in 1987. Two of his sons, Klay and Mychel, became NBA players, and his third son, Trayce, became a professional baseball player.

He was the fourth #1 overall draft pick behind Kareem Abdul-Jabbar, Magic Johnson and James Worthy to play for the Los Angeles Lakers.

Mychal Thompson Is A Member Of