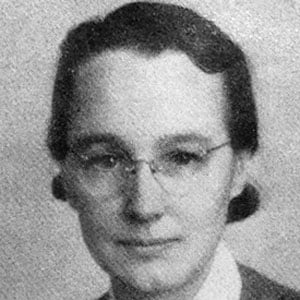 Chemist remembered for her secret work on the development of the atomic bomb. Later in her career, she made important discoveries related to the metallic elements of indium and tellurium.

After graduating from Middlebury College and Boston University, she served in the Women's Army Corps during World War II. It was during her time with the WAC that she became involved in the top-secret Manhattan Project.

During the late 1960s and early 1970s, under contract with the National Aeronautics and Space Administration (NASA), she studied the chemical composition of rocks collected on the Moon.

A native of Orange, Massachusetts, she later settled in Illinois, where she worked in the chemistry department at the University of Chicago.

Under the direction of physicist and Manhattan Project leader J. Robert Oppenheimer, she studied the radioactive potential of various uranium isotopes.

Myrtle Bachelder Is A Member Of