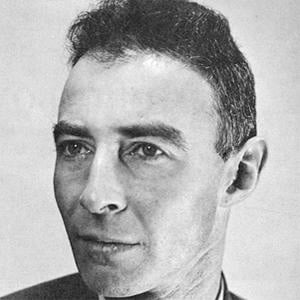 Led America into the atomic era with his research into nuclear physics and supervision of the Los Alamos laboratories from the very beginning of the Manhattan Project. In 1953, after a military report linked him to Communists in the past, he lost his prestigious position within the U.S. government.

At their height, the Los Alamos laboratories, which he designed, employed over 3,000 people, all engaged into researching the splitting of the atom.

Almost a decade after his reputation was ruined by allegations that he had communist sympathies President John F. Kennedy awarded him the Enrico Fermi Award.

He was born in New York City, his father Julius S. Oppenheimer was a successful textile merchant, and his mother Ella Friedman was a non-observant Jew. He was married to Katherine Puening Harrison from 1940 until his death 1967 and they had two kids named Katherine and Peter Oppenheimer.

After Albert Einstein warned the U.S. government that Germany was working on atomic weapons, he turned his attention to the practical question of how to make those weapons first.

J. Robert Oppenheimer Is A Member Of