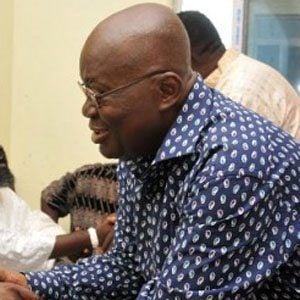 After serving the Abuakwa and Akim Abuakwa South constituencies in the Ghanaian Parliament, this New Patriotic Party politician became Attorney General of Ghana and, later, Ghanaian Minister of Foreign Affairs. He became the President of Ghana on January 7, 2017.

After studying at Lancing College in Sussex, England, he earned an undergraduate degree in economics from the University of Ghana. He later worked as a lawyer in France, England, and his native Ghana.

He ran for President of Ghana in both 2008 and 2012, losing to John Atta Mills and John Mahama, respectively.

In the mid 1990s, he organized a series of demonstrations against then-President Jerry Rawlings' Value Added Tax policy.

Nana Akufo-Addo Is A Member Of