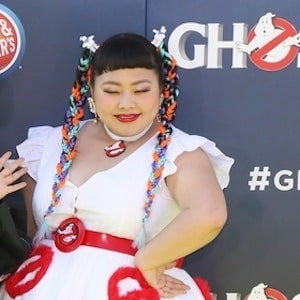 Actress and comedian who earned the title of Japanese Beyonce after her 2008 imitation of Beyonce Knowles. She has also become a social media superstar as an advocate for plus-size beauty, earning more than 9 million followers. She also launched the fashion line Punyus.

She made her acting debut at the age of eighteen, despite the fact that it was against her mother's wishes. She got her start comedically lip syncing to Beyonce songs like "Crazy in Love."

In 2017, she voiced Ashima in the Japanese dub of Thomas & Friends's The Great Race.

Her mother is Taiwanese and her father is Japanese. They divorced when she was young.

She joined Mao Inoue in the cast of the 2012 comedy film Tug of War!

Naomi Watanabe Is A Member Of