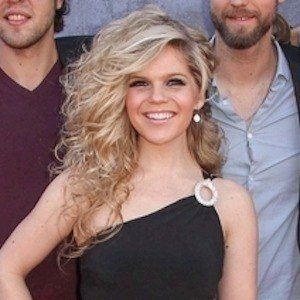 Singer and multi-instrumentalist who gained widespread fame competing as a member of Blake Shelton's team on the thirteenth season of The Voice. She is also the front-woman of the band Natalie Stovall and the Drive.

She began taking violin lessons at the age of four and by ten had scored a gig at the Opryland Kids Club. She later went on to study at the Berklee College of Music.

She previously fronted the now-defunct band Natalie Stovall and the Green Line South. She also toured as a fiddler and singer for Bobby Bones and the Raging Idiots.

She has an older brother named John. She married drummer James Bavendam in 2008. They were in the band Natalie Stovall and Green Line South together.

Both she and Esera Tuaolo competed as members of Team Blake on The Voice.

Natalie Stovall Is A Member Of