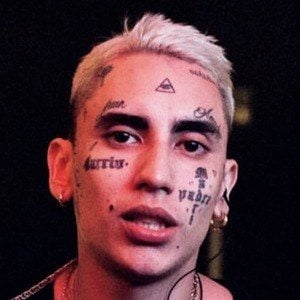 Trapper who became most well known for his 2017 hit song "Tumbando el Club." In 2018, he joined Duki and YSY A in forming the trap trio Modo Diablo. The first song they released was titled "UH." Some of his other top tracks include "Messi" and "Ponte Pa' Mi," featuring Eladio Carrión.

He began to make his name in the Argentine hip hop game in his early 20s by posting videos of himself freestyling.

In 2019, he performed on the third day of Lollapalooza Argentina, which was headlined by Kendrick Lamar and Lenny Kravitz. Modo Diablo was nominated for the award given to the top Radar Trap Artist in Spanish at the 2020 Spotify Awards.

He is from Argentina. His real name is Sebastián Chinellato. He has a son named Amadeo.

In March 2019, he released the remix of "Tumbando el Club," featuring a number of well-known artists such as C.R.O, Obie WanShot, YSY A, Cazzu, Khea and Lucho SSJ.

Neo Pistea Is A Member Of