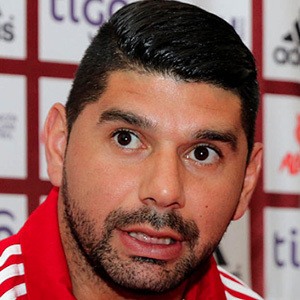 Argentinian and naturalized Paraguayan soccer central midfielder who's played for numerous clubs including San Lorenzo, Olimpia and Rosario Central. He competed on the Paraguayan national team during the 2010 World Cup in South Africa.

His teams have won titles at the 2014 Copa Libertadores, 2015 Supercopa Argentina and 2018 Copa Argentina.

Diego Maradona and Ángel Di María are other high-profile soccer stars who were born in Argentina.

Néstor Ortigoza Is A Member Of