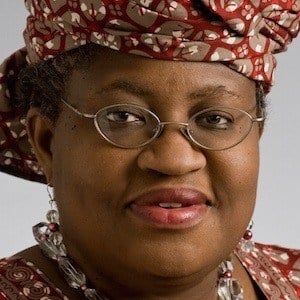 She attended the International School Ibadan and later Harvard University, where she graduated with honors in 1977. In 1981 she graduated from the Massachusetts Institute of Technology with a PhD in regional economic development.

She was up for the presidency of the World Bank in both 2007 and 2012 but did not receive the position both times. In 2006 she resigned as Minister of Foreign Affairs after she was ousted as the leader of Nigeria's Economic Team by former president Olusegun Obasanjo.

She is of the Igbo people and was born in Ogwashi-Ukwu, Nigeria, to her mother and her father who was Professor Chukwuka Okonjo, King of The Umuobi Royal Family of Ogwashi-Ukwu. She married Ikemba Iweala and they had four children.

Her son Uzodinma Iweala is a popular author and wrote the book Beasts of No Nation, which was adapted into a film by Netflix, directed by Cary Fukunaga and starring Idris Elba among others.

Ngozi Okonjo-Iweala Is A Member Of