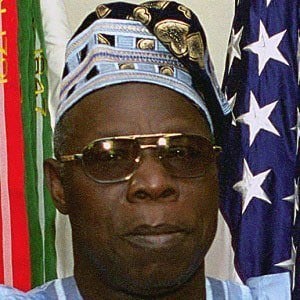 Former General in the Nigerian Army who served as the President of Nigeria from 1999 to 2007. He was the first elected and civilian head of state in the country's history after more than a decade of military rule.

He grew up in Abeokuta and enlisted in the Nigerian Army in 1958. He was promoted to Chief Army Engineer in 1967.

Before becoming President, he was an opponent of what he viewed as severe human rights abuses by dictator Sani Abacha and was jailed for his involvement in a failed coup.

He has been married four times and his six children. One of his sons, Dare, has served as a Principal Program Manager for Microsoft.

Umaru Musa Yar'Adua succeeded him as the President of Nigeria in 2007.

Olusegun Obasanjo Is A Member Of