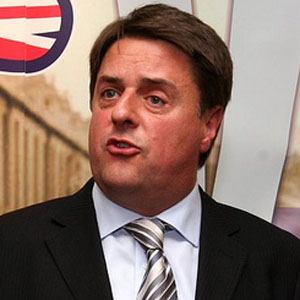 Former leader of the British National party who was indicted for inciting racial hatred in 1998. He began representing North West England in Parliament in 2009.

He joined the National Front, a racist, whites-only UK political party, in 1970, before starting his own party.

He was a prominent holocaust denier, and his public debate with Holocaust survivors was controversial, with many claiming he should not be given a platform for his views.

He married Jackie Griffin, who took on the role of his assistant and the administrator of the far-right British Nation Party, which he led.

His anti-immigrant rhetoric was similar to that of the late American senator Theodore Bilbo, an outspoken opponent of the mixing of races.

Nick Griffin Is A Member Of