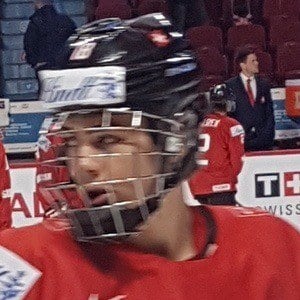 Centre who was chosen by the New Jersey Devils with the first overall pick in the 2017 NHL Entry Draft. He was previously named Rookie of the Year in the Quebec Major Junior Hockey League and Canadian Hockey League.

He spent his early years in the EHC Visp youth system before transferring to SC Bern.

He became the first Swiss player ever to be taken first in the NHL Entry Draft.

He modeled his game after Pavel Datsyuk and took the same jersey number: 13.

Nico Hischier Is A Member Of