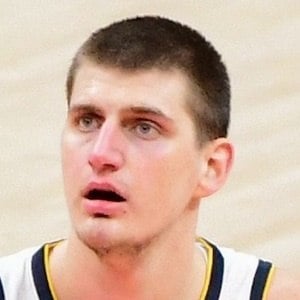 2nd round selection of the Denver Nuggets in the 2014 NBA draft who officially broke out during the 2016-2017 season as the official starting center for the Nuggets. He was named to the NBA All-Rookie First Team for the 2015-2016 season and he made his first All-Star team in 2019. He was named the 2021 NBA MVP, becoming the first player in Nuggets franchise history to win the award.

He played with the professional basketball team KK Mega Basket from 2012 to 2015. He was the Adriatic League MVP in 2015.

He has older brothers named Nemanja and Strahinja. The younger of the two, Nemanja, played college basketball at the University of Detroit Mercy.

He took the starting center job in Denver from Jusuf Nurkic. Nurkic would be traded to the Portland Trail Blazers during the 2016-2017 season.

Nikola Jokic Is A Member Of