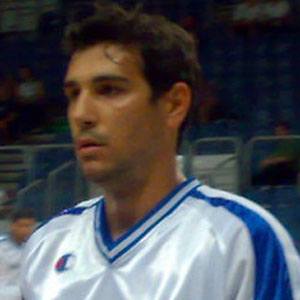 Greek basketball player who played the point and shooting guard positions; he was nicknamed "The Lord of the Rings" for his many medals.

He played youth basketball for the Saloniki team in 1996 at the Greek YMCA and he started his pro career with AEK Athens from 2000 until 2005.

He won gold medals at the 2002 FIBA Europe Under-20 Championship in Lithuania and at the 2005 FIBA EuroBasket in Serbia & Montenegro; he also played for Greece at the 2004 Summer Olympics and the 2008 Olympic Basketball Tournament.

He and Fani Skoufi were married in 2010 for which Greek national basketball teammate was his best man.

Nikolaos Zisis Is A Member Of