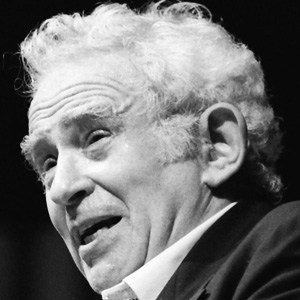 Author of fiction and non-fiction who received the Pulitzer Prize for both The Executioner's Song (1979) and The Armies of the Night (1968). His well-known essays and essay collections include The White Negro (1957) and The Presidential Papers (1963).

After studying aeronautical engineering at Harvard University, he served in the U.S. Army during World War II. In 1948, he published his debut work, a semi-autobiographical novel called The Naked and the Dead.

He co-founded the popular New York City newspaper, The Village Voice, in 1955, and became known for his works of New Journalism (also called creative nonfiction).

He married his first wife, Beatrice Silverman, in 1944. He was married and divorced four more times before marrying sixth wife, Norris Church Mailer, in 1980 (the couple remained married until Norman Mailer's death). Through his six marriages, he fathered nine children.

Author Jules Feiffer received a Pulitzer Prize for his work in The Village Voice, a publication that Mailer helped establish.

Norman Mailer Is A Member Of