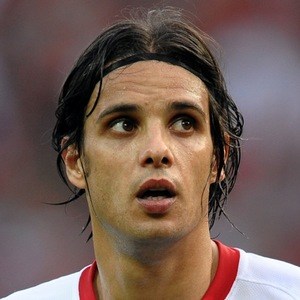 Portuguese soccer player who gained fame playing for teams such as Benefica, Fiorentina, and Blackburn. He also played for the Portuguese national team and logged 29 goals in 79 caps for the national team. His career highlights include playing in two World Cups and three European Championships.

He began playing youth soccer for Amarante in 1987 and later joined Boavista in 1990.

His brother Tiago also played soccer professionally. He had a daughter named Laura from his first marriage to Isméria. He married Patrícia Aguilar in 2006.

He played alongside Rui Costa for Benfica and the Portuguese national team.

Nuno Gomes Is A Member Of