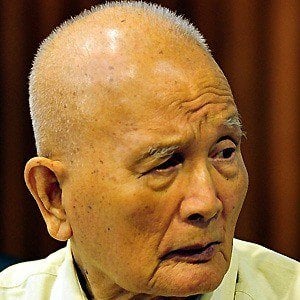 Cambodian communist who was the second in command during the Khmer Rouge's attempt to take power in the 1970s. He was arrested in 2007 for war crimes and crimes against humanity.

He worked in the Thai Ministry of Foreign Affairs after studying at Thammasat University.

He has been charged for crimes against humanity by the United Nations.

He and his wife Ly Kimseng had three children together.

He was nicknamed Brother Number Two as the second in command to Pol Pot.

Nuon Chea Is A Member Of