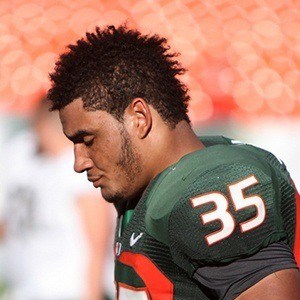 Defensive end who was named second team All-Pro at the conclusion of the 2016 season with the New York Giants, which was his first with the team.

He played college football for the University of Miami Hurricanes. He played three seasons before declaring for the NFL Draft following his junior year.

He was drafted in the third round by the Miami Dolphins in 2012 as the first Miami Hurricanes player taking by the Dolphins since 2004.

His parents' names are Lascelles and Bernadette Vernon.

He has played on the New York Giants' defensive line alongside Jason Pierre-Paul.

Olivier Vernon Is A Member Of