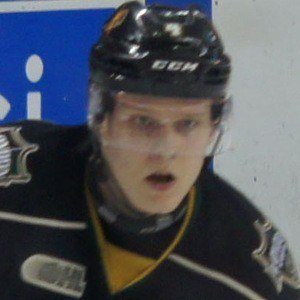 Finnish defenceman who has played for the Ontario Hockey League team the London Knights. He previously played for the Vancouver Canucks. He was also part of Finland's national team and won gold at the 2016 World Junior Championships.

He started playing junior hockey at 14 for Finland's Jokerit U16 team.

He was the fifth overall draft pick by the Vancouver Canucks in the 2016 NHL Entry Draft.

He was born in Helsinki, Finland. He has played in Canada and the U.S. for hockey.

He has played on the London Knights with teammate and captain Mitch Marner.

Olli Juolevi Is A Member Of