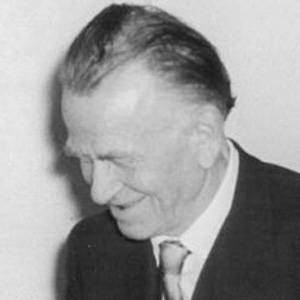 Painter and printmaker known for "Stormtroopers Advancing Under Gas" and other works that exposed the harsh realities of war. He was prominent within the Neue Sachlichkeit.

He attended the Academy of Fine Arts in Dresden and later served in World War I. He began painting landscapes while apprenticing with Carl Senff from 1906 to 1910.

He was fired from his teaching position at Dresden Academy after the Nazis rose to power and condemned his artwork as degenerate.

His father, Franz, was an iron foundry worker and his mother, Louise Dix, was a seamstress and amateur poet. He was the father of two sons--Ursus and Jan--and a daughter, Nelly.

He was forced by Adolf Hitler's Nazi regime to paint only benign landscapes; however, he continued to create allegorical works that subtly denounced Nazism.

Otto Dix Is A Member Of