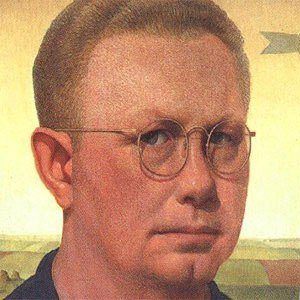 Best known for his iconic painting, 'American Gothic.' He pioneered Regionalism along with John Steuart Curry and Thomas Hart Benton. He became the patron artist of Cedar Rapids.

He began studying at the School of the Art Institute of Chicago in 1913; he traveled to Europe four times between 1920 and 1928, where he was exposed to the Impressionist and Post-Impressionist styles.

His "American Gothic" was first exhibited by the Art Institute of Chicago in 1930. It would never fall out of the American consciousness, being honored and parodied in countless forms of media.

His father passed away in 1901, after which his family relocated to Cedar Rapids. He grew up with a sister named Nan. He worked as an apprentice at a Cedar Rapids, Iowa, metal shop. He and Sara Sherman Maxon were married from 1935 until 1938.

He and Jean Seberg were both born in Iowa.

Grant Wood Is A Member Of