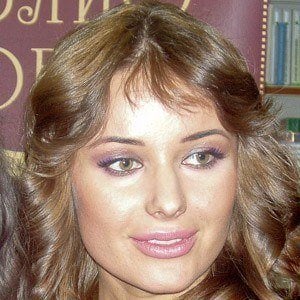 Known for her beauty pageant titles of Miss Russia (2001) and Miss Universe (2002), this Russian model also worked as a policewoman and television host. In the latter capacity, she hosted the Russian finals of the Eurovision Song Contest and the You Are a Supermodel reality series.

In 2002, she completed a dissertation in the field of Civil Law, earning a PhD from the Russian Ministry of Interior's Saint Petersburg University.

In the second decade of the 21st Century, she established a Russian school for girls in the city of Ufa and also created her own fashion line, Ofera.

She grew up in Pskov, Russia, as the daughter of a psychiatric nurse and a nuclear physicist. She and her second husband, Andrey Mikhaylovich Borodin, welcomed two children -- Fyodor and Elizaveta -- between 2012 and 2013.

Oxana Fedorova Is A Member Of