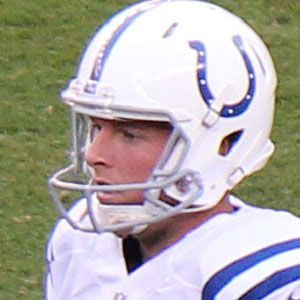 Punter who was drafted out of West Virginia University in 2009 and made the PFWA All-Roookie Team in his first season with the Indianapolis Colts. He was named a First-Team All-Pro in 2014, averaging 46.7 yards per punt.

He played soccer as well as football at Plum High School in Plum, Pennsylvania.

He has been a regular guest on the award-winning morning radio show The Bob & Tom Show.

He has dated 2010's Miss Indiana USA Allison Biehle. His parents are Tim and Sally McAfee.

He and Drew Butler are two of the NFL's best-known punters.

Pat McAfee Is A Member Of