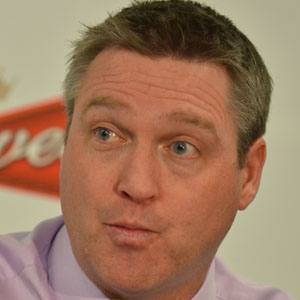 Legendary NHL goalkeeper dubbed "Saint Patrick," who won two Stanley Cup Championships with the Montreal Canadiens and two with the Colorado Avalanche. He retired with a number of NHL records including most career wins, which was later topped by Martin Brodeur.

His dream of becoming a goalie started at age seven. He would go on to popularize the butterfly style of goaltending.

He became head coach and vice president of hockey operations of the Colorado Avalanche in 2013 and quickly turned around a struggling franchise. He received the Jack Adams Award for coach of the year following the 2013-14 season.

He had three kids in a sixteen-year marriage to Michele Piuze, which ended in 2003.

He won two Stanley Cups alongside Hall of Fame center Joe Sakic on the Avalanche.

Patrick Roy Is A Member Of