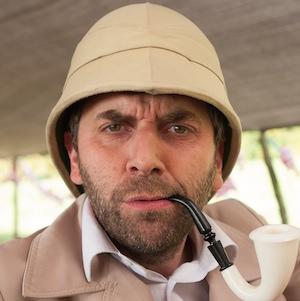 Born Paul Alborough, he is the first Steampunk themed rap artist who creates a unique neo-Victorian blend of hip hop and comedy. He has performed at events and festivals including Dragon Con, Comicpalooza, Glastonbury Festival, and The San Francisco Edwardian Ball.

He used to teach in a Special School. He still works with young people and facilitates rap workshops in schools around the country.

He was awarded Best Musical act at Brighton Fringe in 2011, Greatest Living Eccentric & Most Eccentric Artist in 2012, and Best Solo Musician & Best Solo Personality by the Steampunk Chronicle reader's choice awards in 2014.

He grew up in the Suffolk countryside where he was inspired by comic books, cartoons, and old tapes of American hip hop from the late '80s. He has one sister and two loving parents.

He is a comical musician, similar to Weird Al Yankovic .

Professor Elemental Is A Member Of