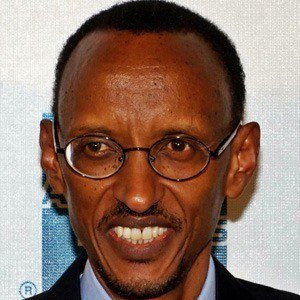 Politician who became the Sixth President of Rwanda in 2000. He helped end the Rwandan Genocides in 1994 as a leader of the Rwandan Patriotic Front, which invaded Rwanda to end the killings by Hutus of Tutsis.

He was a solider in the Armed Forces prior to entering politics, and was a member of the Rwandan Patriotic Front.

His rule has been criticized by global watch dog organizations like Amnesty International, who claim that his regime suppresses the freedom to oppose his role and organize parties as a result.

He married his wife, Jeannette Nyiramong, and had five children.

He and George W. Bush were both highly-criticized world leaders.

Paul Kagame Is A Member Of