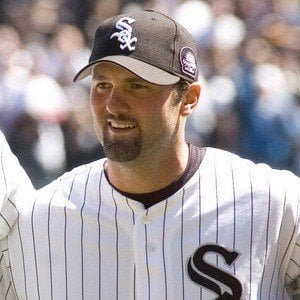 Six-time All-Star first baseman who helped lead the Chicago White Sox to a World Series Championship in 2005. He hit 439 career home runs and served as White Sox team captain from 2006 to 2014. In 2016, he announced his retirement.

He was ranked the top catcher in the nation during his senior year at Chaparral High School in Scottsdale, Arizona.

He was named American League Comeback Player of the Year in 2004.

He had two sons and a daughter with his wife Jennifer.

He and Hall of Fame catcher Carlton Fisk are two of the all-time home run leaders for the Chicago White Sox.

Paul Konerko Is A Member Of