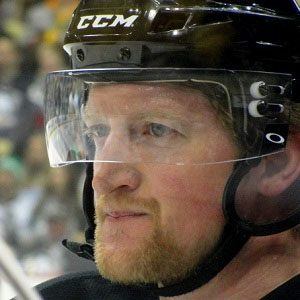 NHL defender who spent six years with the New Jersey Devils and five years with the Pittsburgh Penguins before signing with the San Jose Sharks in 2015. He also helped the United States national team finish in 4th place at the 2014 Olympics.

He played three years of college hockey at the University of Minnesota, helping the team win NCAA Division I National Championships in both 2002 and 2003.

He was drafted 62nd overall by the Devils in 2000. He helped the Sharks reach the 2016 Stanley Cup Finals.

He was born in Elk RIver, Minnesota.

He was teammates with Zach Parise both on the Devils and on the U.S. national team.

Paul Martin Is A Member Of