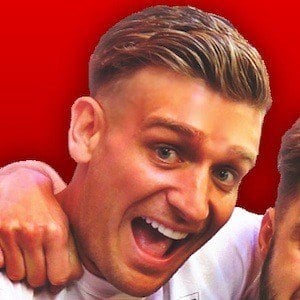 English comedian who is widely known across social media as the duo Woody and Kleiny with his partner Paul Klein. Their original comedic sketches, pranks, and social experiments have propelled them to internet fame, including over 4.7 million followers on their joint Instagram account.

They initially started out on YouTube back in 2013 and would later expand to other social media platforms.

He and Paul Klein appeared on the 3rd series of Britain's Got Talent as tandem football freestylers. Their YouTube channel has amassed more than 3 million subscribers as well.

He was born and raised in England. He has a son named Bailey who's featured in his videos.

He and Paul Klein were interviewed by Mario Lopez for his iHeartRadio show in July 2016.

Paul Wood Is A Member Of