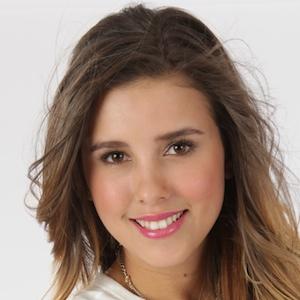 Mexican actress and singer who had her debut role as Andrea Paz in the Mexican telenovela Niña de mi Corazón in 2010. In 2012, she landed the leading role in the teen telenovela Miss XV. She is extremely popular on TikTok, with over 5 million followers on her paulinagoto account.

She took dance classes as a child and trained as a rhythmic gymnast from age 5 to age 14.

She released her self titled debut album in 2010, and it reached number 43 on the Mexican music charts. She was nominated for Favorite Actress at the 2020 Kids' Choice Awards México.

Her real name is Paulina Gómez Torres. Her parents are Alicia Torres and Eduardo Gómez. She has a younger brother named Eduardo. She began dating her co-star Horacio Pancheri in 2016. She and Rodrigo Saval Pasquel began a relationship in April 2019.

She stars alongside Natasha Dupeyron in Miss XV.