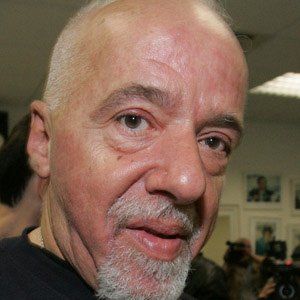 New-age Brazilian novelist who has reached a worldwide audience with works such as The Alchemist and Like The Flowing River. The former work has been translated into nearly seventy languages.

He was briefly committed by his parents to a mental institution when he refused to follow a "practical" career path. He briefly studied law before experiencing a spiritual wake-up call during a 1986 pilgrimage to the Road of Santiago de Compostela.

His novel, Veronika Decides to Die, was adapted into a film.

He was born to an engineer father in Rio de Janeiro, Brazil. He later married .

He once criticized James Joyce's novel, Ulysses, and was immediately attacked by fans of the Irish author.

Paulo Coelho Is A Member Of