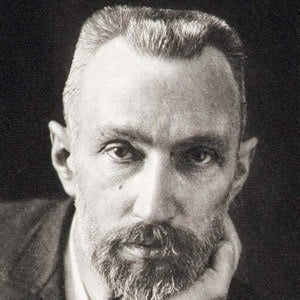 Husband of radioactivity pioneer Marie Curie who collaborated with her on her most important research. He and his wife jointly received the 1903 Nobel Prize in Physics for their research into the radiation phenomena.

A child prodigy, he had his math degree complete at 16 and by 18 he was ready to pursue his doctoral studies.

He and his wife worked together to isolate the elements polonium and radium, and were the first to coin the term 'radioactivity.'

His daughter Irene Joliot-Curie, and his son in-law Federic Joliot-Curie were also physicists who won Nobel Prizes for their research into radioactivity.

Ernst Ruska is another winner of the Nobel Prize in Physics.

Pierre Curie Is A Member Of