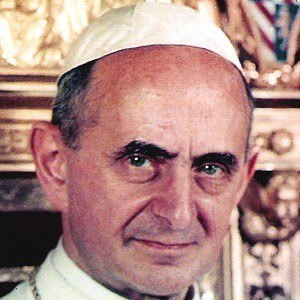 Head of the Catholic Church from 1963 until his death in 1978 who worked to improve relations with Orthodox and Protestants.

He completed his study of Canon Law in Milan in 1920.

He rejected the use of birth control in his encyclical Humanae Vitae.

His father, Giorgio Montini, was a member of the Italian Parliment.

He was declared "venerable" by Pope Benedict XVI in 2012.

Pope Paul VI Is A Member Of