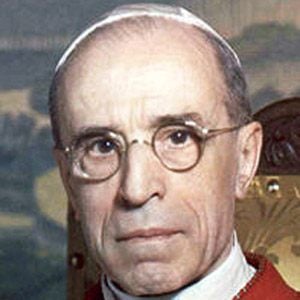 Head of the Catholic Church from 1939 to 1958 who notably signed the controversial Reichskonkordat, a treaty between the Holy See and Nazi Germany, in 1933.

When he was 18 he began his theology studies at Rome's oldest seminary, Tridentine Collegio Capranica Seminary.

He employed diplomacy to aid victims of the Holocaust and directed his Church to provide discreet and often secretive aid to persecuted Jews.

His grandfather, Marcantonio Pacelli was the Under-Secretary in the Papal Ministry of Finances.

Though he spoke out against genocide and anti-semitism he has been criticized by later generations for remaining publicly neutral and not condemning Adolf Hitler.

Pope Pius XII Is A Member Of