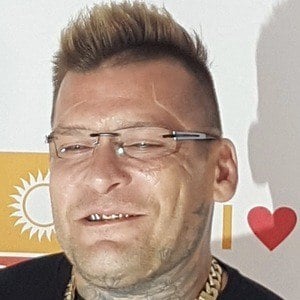 Polish rapper who has earned legions of fans through his fusion of dubstep, grime and gangsta rap, as heard on releases like the gold-selling Nasza Broń To Nasza Pasja. He is also an MMA fighter.

He founded the group Firma with rappers Bosski Roman, Tadek, Pomidor and Kali in 2000.

He had his eyeballs tattooed.

His real name is Pawel Rak.

He collaborated with Florida rapper Stitches on the song "Stitches & Scars."

Popek Is A Member Of