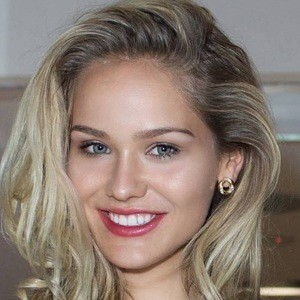 Model, host and social media star who landed a presenting role on Channel 7Mate's Freesurfer TV series and was previously a finalist in the Miss Universe pageant in 2015. She has presented events like the Mercedes Benz Fashion Show and been the face of Radio Metro.

She has lived in Airlie Beach, Australia; together with her family, they explored 74 tropical islands along the Whitsunday coastline.

She has received the Order of Australia honour for her community service and motivational speaking. She has appeared as a stunt double in the films The Shallows and Adrift.

She has a sister named Bianca. Her parents are of Danish-English descent.

She was Blake Lively's stunt double in The Shallows.

Portia Large Is A Member Of