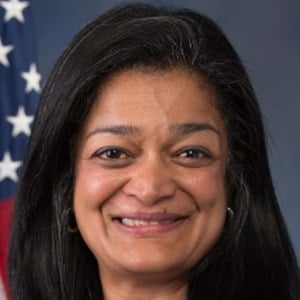 Politician and member of the Democratic Party who began her term as the U.S. Representative from Washington's 7th congressional district in 2017. Previously, she was the executive director of the pro-immigrant advocacy group OneAmerica.

She received her bachelor's degree from Georgetown University and her MBA from Northwestern.

She became the first Indian-American woman to serve in the House of Representatives.

Her husband's name is Steve Williamson. She has a son from a previous marriage named Janak.

She was once described as "a rising star in the Democratic caucus" by House Speaker Nancy Pelosi.

Pramila Jayapal Is A Member Of