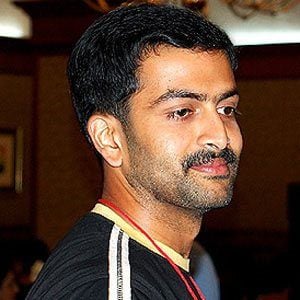 Award-winning actor and playback singer who performs under the name Prithviraj and is popular in Malayalam films, including Nandanam and Stop Violence. In 2011, he received the National Film Award for Best Feature Film for his role in Malayalam.

He studied information technology at the University of Tasmania before being offered the lead role in Nandanam.

In 2006, he won the Kerala State Film Award for Best Actor for his performance in the Malayalam film, Vaasthavam.

He was born the son of actors Sukumaran and Mallika. In 2011, he married BBC India reporter Supriya Menon. They have a daughter named Alankrita.

Prithviraj Sukumaran Is A Member Of