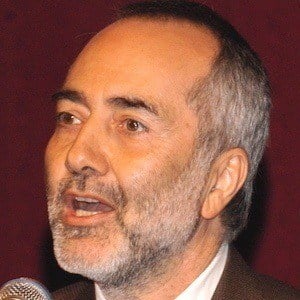 Egyptian-born Canadian children's musician with almost five decades of successful albums. He is perhaps best known for his hit singles like "Baby Beluga" and "Bananaphone." He is also a passionate environmentalist and children's rights and safety advocate.

In the early 1970s while running a coffee shop, he would often frequent a local guitar store in Toronto. His career began by performing the guitar in coffee houses around the city. He then hitchhiked to Vancouver to find "fame and fortune" before finding success back in Toronto where he played his first concert for children.

In 2013, he released the book Lightweb Darkweb: Three Reasons To Reform Social Media Before it Re-Forms Us, a book documenting the pros and cons of social media.

His parents died within hours of each other in 1995. His brother, Onnig, was a well-known portrait photographer and his sister, Ann, the information and privacy commission for Ontario.

Scientist David Suzuki was featured in his 2007 single "Cool It" about calling attention to global warming.

Raffi Is A Member Of