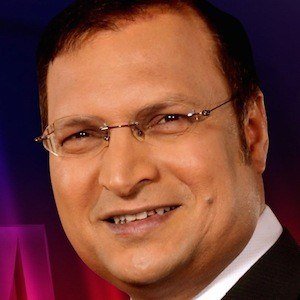 Journalist and news personality widely known as the host of Aaj Ki Baat and the editor-in-chief of its parent India TV. In his 22 years in television, he served as President of The News Broadcasters Association of India and Vice President in Strategic Affairs of The Indian Broadcasting Foundation.

While dabbling in student politics at Delhi University, he was jailed for 11 months during Indira Ghandi's Emergency declared in 1975. Following his release, his interest in politics became a full blown passion.

Before beginning his television career, he worked as an editor for outlets like The Daily and the Sunday Observer. He was named INBA Entrepreneur of the Year in 2009.

He grew up in poverty, living in a 100 square foot home in India with his six brothers and one sister. As an adult, he married television producer Ritu Dhawan.

In March 2015, he received the civilian award Padma Bhushan from President Pranab Mukherjee.

Rajat Sharma Is A Member Of